The stamp issue celebrates individuals across sport, journalism, music, politics and the arts whose anniversaries of birth or outstanding achievement fall in 2013. 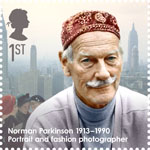 
Photographer Norman Parkinson (1913–90) captured impoverished Welsh coal miners and their families in the late 1930s, models atop New York skyscrapers in the late 1940s, movie stars in the 1950s and The Beatles in the 1960s. In 1980, Parkinson took the famous ‘Blue Trinity’ photograph of the Queen, the Queen Mother and Princess Margaret, a specially commissioned portrait to mark the Queen Mother’s 80th birthday. Though he began his career in the world of society portraiture, he was greatly influenced by news photography and before long was taking his camera out of the studio, on to the streets and across the world. 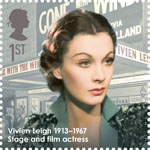 
On 10 December 1938, the actress Vivien Leigh visited the set of Gone with the Wind (1939) in Hollywood to meet the film’s producer David O Selznick. Two weeks after her screen tests, she was offered the coveted role of Scarlett O’Hara. One of the greatest movie stars of the era, incandescently beautiful and a dedicated actress, Leigh received an Academy Award in 1940 for her performance as Scarlett and another in 1952 for playing Blanche DuBois in A Streetcar Named Desire (1951). 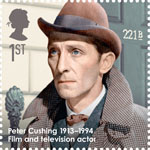 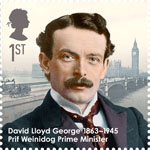 
Eloquent orator, splendid negotiator and political titan, David Lloyd George (1863–1945) is a man whose achievements still resonate in the 21st century. Before the First World War, his social reforms as Chancellor of the Exchequer, which included the introduction of state pensions and national insurance, laid down the foundations of the British welfare state. During the war, as Chancellor (1908–15), Minister of Munitions (1915–16) and Secretary of State for War (1916) Lloyd George transformed the administration of the British economy. As Prime Minister from 1916, the ‘Welsh Wizard’ was a key figure among the Allied powers and helped to lead the nation to victory in 1918. 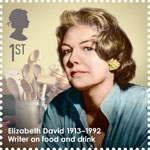 
In 1950, amidst bomb sites and the grey shades of austere, post-war Great Britain, Elizabeth David (1913–92) cast open the doors for her fellow citizens on the “blessed lands of sun and sea and olive trees” with the publication of A Book of Mediterranean Food. It was the first volume in a series that established David as the finest English-language writer on cooking and the culture of food. French Country Cooking followed a year later, then Italian Food (1954), Summer Cooking (1955) and French Provincial Cooking (1960). 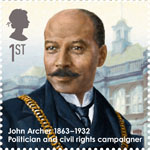 
It was on 10 November 1913 that John Archer (1863–1932) told his fellow Battersea councillors that history had been made, after they had endorsed him as the first mayor of African-Caribbean descent in London and the second in Britain. Archer’s life was a catalogue of ‘firsts’. When the inaugural Pan-African Conference was held in London in 1900, Archer, a medical student at the time, was in attendance. Six years later, his first election as a councillor signalled what would be a lifelong career in local and international radical and socialist politics 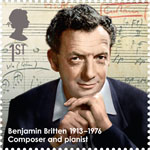 
The opera Peter Grimes premiered at Sadler’s Wells Theatre in London in 1945. Performed in the midst of a blitzed and war-weary London, it conjured up a timeless conception of the sea, the Suffolk coast and a loss of innocence. Its composer, Benjamin Britten (1913–76), had written a masterpiece with “the struggle of the individual against the masses” at its core. Though Britten was already a respected composer at that time, as he continued to create great works his international reputation grew immeasurably. 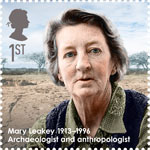 
The voyages of discovery made by Mary Leakey (1913–96) could start with a scrap of bone, an interesting-looking fossil fragment, a prehistoric stone tool or rock art. For more than half a century, the archaeologist and palaeoanthropologist played a key role in exploring the origins of humanity, which resulted in many significant finds, such as the hominid skull Australopithecus boisei and the Laetoli footprints in Tanzania. 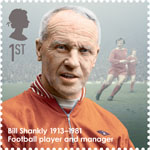 
There are the statistics – and there is the legend. As manager of Liverpool FC from 1959 to 1974, Bill Shankly (1913–81) led the club to its first FA Cup final victory in 1965, as well as in 1974, the year of his retirement. During an immensely successful period in Liverpool FC’s history, there were also League Championship wins in 1964, 1966 and 1973. As a player from 1932 to 1949, Shankly won an FA Cup medal with Preston North End in 1938 and represented Scotland 12 times. Before his arrival on Merseyside in 1959 he managed Carlisle United, Grimsby Town, Workington and Huddersfield Town. 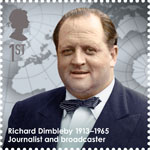 
Richard Dimbleby (1913–65) joined the BBC as its first radio reporter and later its first war correspondent. He became central to wartime radio journalism, flying on many bombing raids over Germany. In April 1945, he witnessed at first hand the British liberation of the Nazi concentration camp at Bergen-Belsen, describing the day as “the most horrible of my life”. 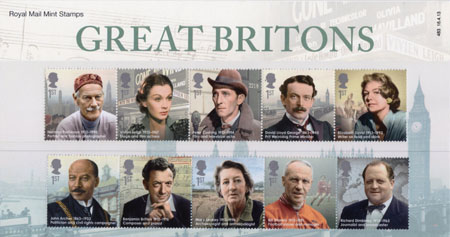 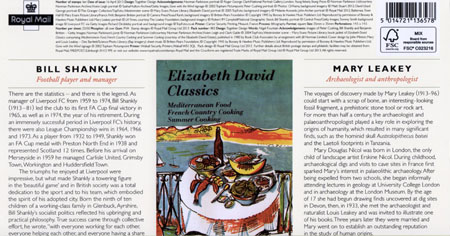 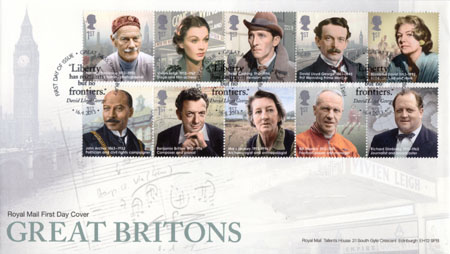 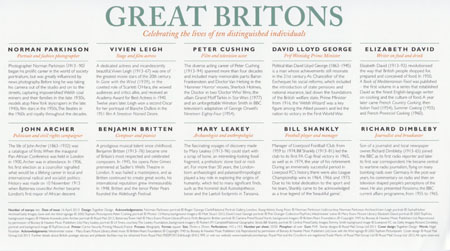 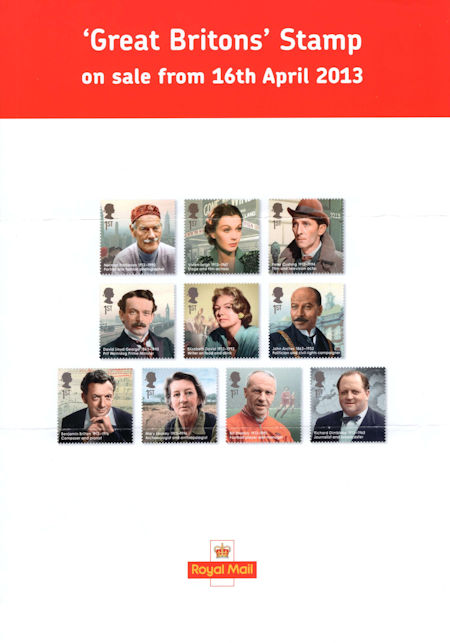 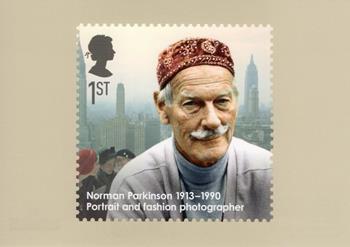 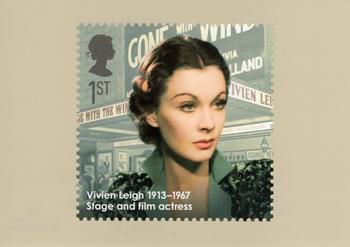 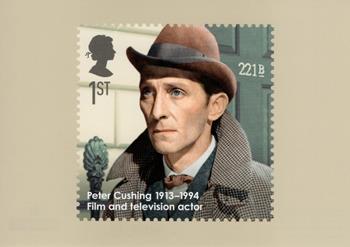 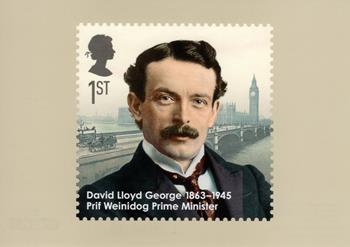 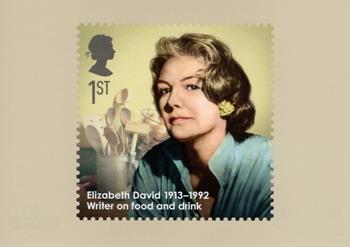 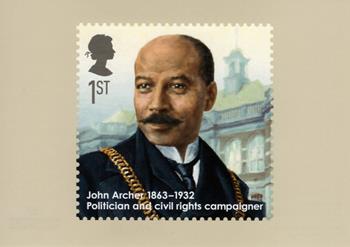 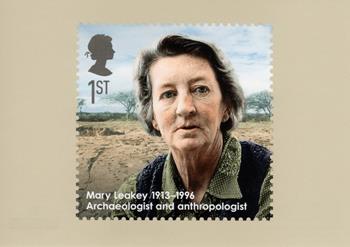 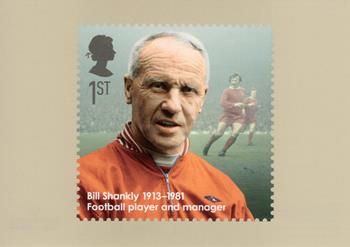 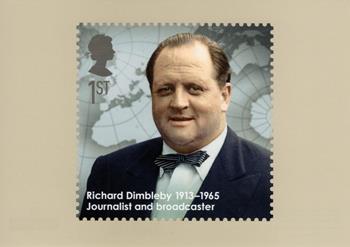